The LA Kings have announced their season-opening roster.

Included on the roster are 13 forwards, seven defensemen and two goaltenders, as well as a four-man taxi squad.

The roster is as follows –

Of the 22 members on the active roster, each player has NHL experience, but four players will be in search of their LA Kings debut – Grosenick, Alt, Maatta, Athanasiou. Luff, Vilardi, Clague and Anderson will break camp with the Kings for the first time, after all four started last season either in the AHL with the Ontario Reign, or on Injured Reserve.

The taxi squad is composed of one goaltender, one defenseman and two forwards. Anderson-Dolan and Andersson both have NHL experience, while Strand and Villalta do not. Anderson-Dolan made the opening night roster with the Kings in 2018, and appeared in four games last season, while Andersson has skated in parts of three seasons with the New York Rangers. All four members of the taxi squad are waiver-exempt.

As a part of today’s announcement, forwards Quinton Byfield and Arthur Kaliyev were assigned to AHL-Ontario. Both players will wear their Kings’ numbers (Byfield 55, Kaliyev 52) with the Reign, and both players are slated to skate with the AHL group today.

Also included in today’s announcement are three number changes. Vilardi will now wear #13, Clague will now wear #58 and Grundstrom will now wear #91. When he makes his season debut, Grundstrom would become the first player in Kings history to wear #91. Additionally, as unveiled earlier in camp, Austin Wagner will wear #27 this season, changed from #51 last season.

Kurtis MacDermid, Sean Walker, Cal Petersen, Martin Frk and Alex Turcotte have been designated as “injury/non-roster” to open the season. MacDermid, Walker and Petersen have been labeled as “unfit to play” dating back to Saturday’s Black – White scrimmage. Earlier this week, the Kings announced that Frk and Turcotte are “week-to-week” with lower-body injuries.

One last note – The Kings have a 22-man roster and #22 found a new home. It was reported this morning that Trevor Lewis has earned a one-year contract with the Winnipeg Jets. Good news for a good guy, and someone who contributed to two Stanley Cups in Los Angeles.

This group – consisting of the active roster and the taxi squad – will practice this morning at Toyota Sports Performance Center at 11 AM. 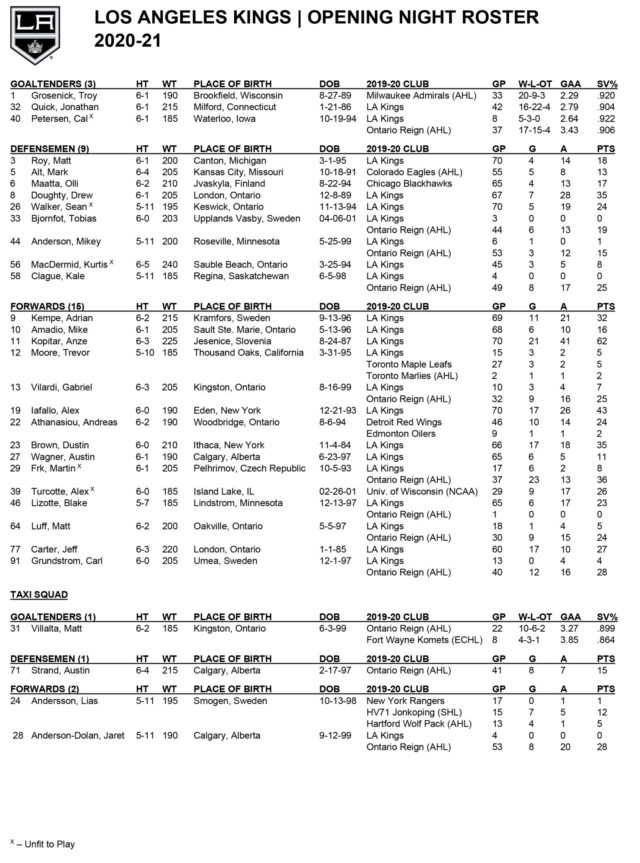